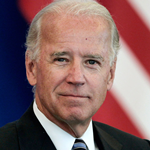 Vice President Joseph R. Biden, Jr. was named the Benjamin Franklin Presidential Practice Professor at the University of Pennsylvania, where he led the Penn Biden Center for Diplomacy and Global Engagement, a new center focused principally on diplomacy, foreign policy, and national security. The Center was located in Washington, D.C. Biden also had an office on the Penn campus in Philadelphia.

His role also included an appointment at Senior Fellow at the Andrea Mitchell Center for the Study of Democracy.

As Presidential Practice Professor, Biden held joint appointments in the Annenberg School for Communication and the School of Arts and Sciences, with a secondary affiliation in the Wharton School.

One of the youngest people ever elected to the U.S. Senate, Biden served as a Senator from Delaware for 36 years, establishing himself as a leader on many of the nation’s most important global and domestic challenges. Over the course of his more than four decades of public service, he has represented the U.S. in every region of the world. As Chairman or Ranking Member of the Senate Foreign Relations Committee for 12 years, Biden played a pivotal role in shaping U.S. foreign policy. He was at the forefront of issues and legislation related to terrorism, weapons of mass destruction, post-Cold War Europe, the Middle East, and Southwest Asia. He also left a lasting mark on domestic policy as a Senator; as Chairman or Ranking Member of the Senate Judiciary Committee for 17 years, Biden was widely recognized for his work on criminal justice issues, including the landmark 1994 Crime Law and the Violence Against Women Act.

As the nation’s 47th Vice President, Biden continued his leadership on important issues facing the nation. A close advisor to President Barack Obama on international affairs, Vice President Biden has represented our country in every region of the world, developed deep relationships with numerous world leaders, and demonstrating U.S. commitment through high-level, face-to-face diplomacy.  He was the Obama Administration’s point person for diplomacy within the Western Hemisphere, working to realize his vision of a Hemisphere that is “middle class, secure, and democratic, from Canada to Chile and everywhere in between.” The Vice President also led the Administration’s efforts to support a sovereign, democratic Ukraine, visiting the country three times in 2014. He was deeply involved in the Middle East, particularly by shaping U.S. policy toward Iraq.

On the domestic front, Vice President Biden was tasked with implementing and overseeing the $840 billion stimulus package in the American Recovery and Reinvestment Act. He also led the Ready to Work Initiative, the Administration’s key effort to identify opportunities to improve the nation’s workforce skills and training systems. A long-time advocate against sexual assault and domestic violence, the Vice President appointed the first-ever White House Advisor on Violence Against Women. In his final State of the Union address in January 2016, President Obama tasked Vice President Biden with leading the nation’s Cancer Moonshot program to “end cancer as we know it,” an effort that the Vice President formally launched several days later when he visited Penn’s Abramson Cancer Center.

On January 12, 2017, President Obama awarded Biden the Presidential Medal of Freedom, with Distinction, the highest civilian honor in the U.S.

Biden and his family have a long affiliation with Penn. His late son Beau, daughter Ashley, and granddaughter Naomi are all Penn graduates. In May of 2013, Biden received an honorary degree from Penn and was the University’s commencement speaker. As both U.S. Senator from Delaware and Vice President of the United States, Biden has spoken numerous times at Penn and has been a regular visitor to campus.