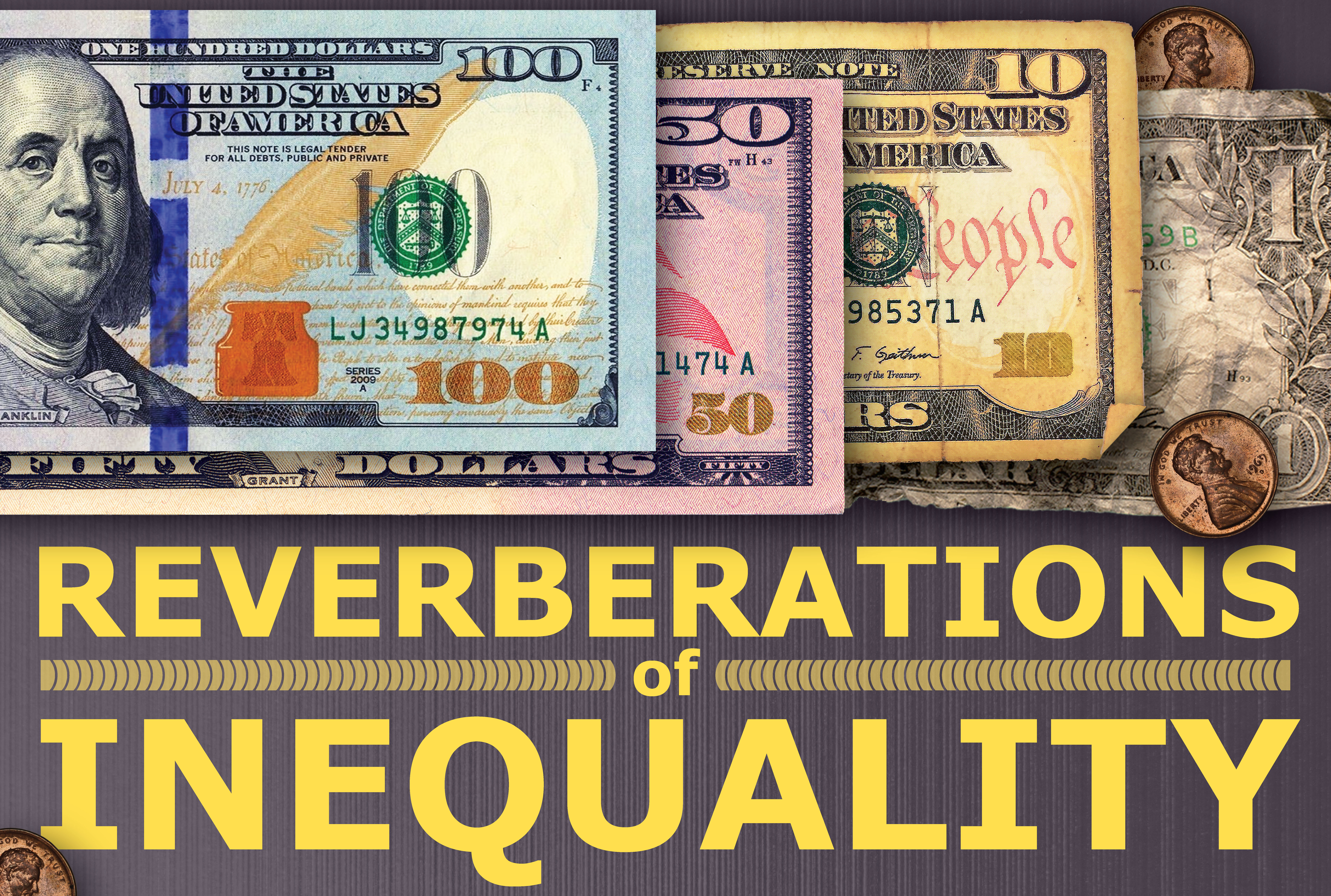 Visit the Reverberations of Inequality archive of essays, podcasts and videos.

Inequality has emerged as a key political issue. There are signs moreover that inequality harms health, diminishes political engagement, and ripples across social life throughout the world. During its 2019-2020 theme year, REVERBERATIONS OF INEQUALITY, the Andrea Mitchell Center will invite a range of speakers to delve into a growing body of scholarship suggesting that inequality is not simply a matter of skewed wealth. Rather, it is something that permeates our lives, its ripple effects shaping our bodies, minds, social networks, identities, life chances, and capacity to participate in shared institutions. And if some degree of equality is indeed a precondition for democratic participation, how might that conflict with the personal liberties that also underlie democracy? What is the correct balance to strike?

Visit the Democracy in Trouble? archive of events and videos.

DEMOCRACY IN TROUBLE?,The Mitchell Center's 2018-19 Speakers Series, is driven by a growing sense that democratic governance is under siege around the world.  New democracies such as Poland and Hungary are reverting to authoritarian practices.  Voters throughout the West – and elsewhere – have shown a willingness to jettison democratic institutions and norms to pursue the narrow interests of national, linguistic, or religious groups.  Commitment to democracy has waned in particular among young people. The United States and other countries have witnessed demagogic attacks on the media, the courts, and an array of perceived internal enemies.  “Democracy in Trouble?” seeks to both examine and counter these trends with wide-ranging discussions that reach our entire campus community and beyond.

Co-sponsored by the University of Pennsylvania Department of Religious Studies
Visit the States of Religious Freedom  archive of events and videos.

ACCORDING TO THE TERMS OF THE INTERNATIONAL RELIGIOUS FREEDOM ACT, passed by Congress in 1998, a unique history of religious freedom has endowed the United States with a special responsibility to promote this virtue abroad as a goal of foreign policy. The U.S. State Department’s Bureau of Democracy, Human Rights, and Labor has compiled annual watchdog-style reports on every country in the world – except for the United States itself – ever since. Yet how exceptional or exemplary is the U.S. record of accommodating religious freedoms? How have other countries, informed by their own histories and circumstances, negotiated complex terrains of religion, statehood and citizenship? And what are the states of religious freedom around the world today, in light of current controversies over abortion, sexuality, changing gender roles, religiously-motivated terrorism, the rights of religious minorities, and the establishment of official religions?

During its 2017-18 theme year on “STATES OF RELIGIOUS FREEDOM,” Penn DCC will study the U.S. experience within a comparative international context, exploring how states – as political entities – accommodate or hinder religious expression and culture, as well as how social conditions – states of collective being – affect and influence the practice of religious freedom.

Co-sponsored by the Alice Paul Center for Research on Gender, Sexuality & Women
Visit the Citzenship on the Edge archive of events and videos.

ALTHOUGH THE PRIVILEGES AND PROTECTIONS PROVIDED by the state are never entirely secure, there are those whose gender, sexual, and racial positioning give them an especially precarious hold on both the legal and symbolic rights of citizenship.  In its 2016-17 theme year, “Citizenship on the Edge: Sex/Gender/Race,” Penn DCC examines the struggles of vulnerable groups to gain or maintain their status as full citizens, recognizing at the same time that the edge they inhabit can be a cutting edge.  In the U.S., women and men of color confront police violence, high rates of incarceration, and attempts to roll back voting rights, while women of all backgrounds contend with the persistence of sexual violence, labor exploitation, and family disintegration.  And while 2015 saw great strides in LGBTQ rights with the achievement of marriage equality and growing public awareness of trans women and men, there is ongoing resistance to these developments.  Globally, anti-gay legislation and violence, state repression, ethnic conflict, and human trafficking for sex and forced labor have all affected the meaning, status and enactment of citizenship, as well as the strategies individuals and communities have publicly mobilized for the recognition of their personhood.

Co-sponsored by The Annenberg School for Communication
Visit the Digital Media and the Future(s) of Democracy archive of events and videos.

THE LONG-TERM IMPACTS OF DISRUPTIVE NEW TECHNOLOGIES are always difficult to predict. This is particularly true for the emergence, spread and evolution of digital media over the last several decades. Do web-based, mobile, and social media provide unprecedented opportunities to democratize the production of news and public information, or do they only weaken the authority and legitimacy of professional journalists? Do they improve the efficiency and accountability of governments and businesses, or do they provide new tools for government and corporate surveillance? Do they enable democratic movements against repressive regimes, or do they provide these regimes greater means of repression? Do they facilitate and even redefine the nature of civic and political engagement, or do they divert attention from public life and issues? Do they contribute to new forms of citizenship and identity that cross national and social boundaries, or do they harden national, ethnic, religious and social divides?  Do they serve as public spaces for deliberation and rational discourse, or do they amplify extreme voices that contribute to the fracturing of societies along ideological lines?  As it devotes its 2015-16 year to the theme, “Digital Media and the Future of Democracy,” Penn DCC seeks to assess the complex impact of the radically evolving media landscape on democratic politics, as well as on the closely related issues of citizenship and constitutional government, both in the United States and around the globe. In our faculty workshops and annual conference, we will enlist the help of an interdisciplinary group of scholars to shed light on these issues, in the hope of providing a clearer vision of future promise and peril.

THE FIRST DECADE OF THE TWENTY-FIRST CENTURY HAS BEEN WIDELY HAILED as a new dawn for Latin America, putting an end to the dominance of neoliberal policies in the region’s politics. This was signaled by the election of such leftist leaders as Hugo Chavez in Venezuela and Luiz Inácio “Lula” da Silva in Brazil – and their successors – and the success of indigenous politicians in Bolivia, Ecuador and Peru.  DCC is devoting 2014-15 to a regional theme, “Post-Neoliberal Latin America,” that highlights the importance of these developments not only for Latin America but for the world. The Program welcomes both empirical and normative scholarship, focused comparatively or on particular nations, regions, or communities, that explores the recent transformations in Latin America; the changing nature of its politics; the impact of political developments on civic and social inclusion; the continuing legacies of mass violence and civil war; the prospects and consequences of regional integration; the changing role of Latin America in the global political economy; and the scope and durability of the post-neoliberal turn.  The papers from this year are now in a published volume, available here.

Co-sponsored by The School of Social Policy & Practice
Visit the Social Rights and Citizenship archive of events and videos.

CITIZENSHIP PROVIDES ACCESS NOT JUST TO THE POLITICAL PROCESS but to an array of social services and support systems, which in turn shape an individual's capacity to participate as a citizen.  But in the decades since T.H. Marshall's influential 1948 lecture, "Citizenship and Social Rights," the concept has been much contested. Marshall cited the recent creation in Britain of national health care, among other programs, as a means to achieve full citizenship for all, offsetting the economic inequalities of modern capitalism.  At the same moment, though unmentioned by Marshall, the United Nations and international treaties expressed commitment to human rights, which included not-fully-specified social and economic rights.  Is some measure of social wellbeing a human right, a right of citizenship or – as many in the U.S. have long maintained – not a right at all?

Co-sponsored by Penn Law
Visit the Constitution Making archive of events and videos.

IN PHILADELPHIA IN 1787, AMERICANS PIONEERED THE CREATION OF WRITTEN CONSTITUTIONS to empower, guide and limit national governments. Today, most modern regimes have such constitutions. But some do not, and many depart sharply from the American model. In 2012-2013, the Penn DCC program will explore how and why constitutions have been and are being made around the world, seeking to illuminate how constitutionalism can be strengthened in the 21st century.

Modern business corporations receive charters from and operate within the legal frameworks of national states. Though they organize and regulate much of the daily lives of a considerable portion of humanity, and though they impact the planet more generally, corporations are not themselves typically constituted internally around ideals such as democracy, citizenship, and egalitarianism, which are associated instead with national political culture. How did corporations as social institutions develop historically, and what role have they played in the rise of modern democratic states? What are and by right ought to be the responsibilities of corporations to their owners, to those who work for them, to the nations in which they operate, and to the planet more generally? What are the national and international roles and responsibilities of multinational corporations who, in the 21st century, often operate on a global scale — and what should they be? How have corporations affected different parts of the world, from Europe and North America, to Latin America, the Middle East, East and South Asia, and Africa?

MODERN CONSTITUTIONAL DEMOCRACIES CONFRONT MANY PROBLEMS of how far citizenship should be structured to express, accommodate, or trump racial and ethnic identities. For example, are racially or ethnically-based representation and affirmative action in employment in education (banned in some modern constitutional democracies, required in many others) ever appropriate? If so, when and why? How far should minority cultural identities be accommodated in public institutions? Are reparations required for unjustly treated indigenous communities or racial minorities? These topics are scheduled for both empirical and normative study in 2010-2011.

TODAY TRADITIONAL CLAIMS OF NATIONAL SOVEREIGNTY ARE BEING CHALLENGED via the growth of dual national citizenships; the creation of supra-national forms of economic and political community; and the devolution of political and economic authority in many federal or federated systems.  More and more people around the globe possess plural citizenships, with no clear single sovereign governing them.  What is driving these developments?  In what respects are they normatively defensible or undesirable? These are the topics to be explored in the DCC program during 2009-2010.

RECENT ELECTIONS IN THE U.S. AND MANY OTHER CONSTITUTIONAL DEMOCRACIES have shown how one of the most basic rights of full citizens, exercise of the franchise, can be frustrated, and how citizens can feel that their opinions do not count even when elections do occur. Issues of how to structure electoral systems and representative assemblies to do democratic justice to all pertinent social and economic groups and political perspectives and to achieve competent governance are answered very differently in different constitutional democracies. Mainstream and emerging media systems also play varying roles in informing, reflecting, or arguably manipulating public opinion and electoral behavior. The DCC Workshops and Spring Conference in 2008-2009 will explore the empirical, normative and policy challenges facing achievement of just, effective representation in modern electoral systems and representative bodies, with attention to the media and other sources of public opinion that shape electoral behavior.

BOTH AS SENDING AND AS RECEIVING NATIONS, MANY CONSTITUTIONAL DEMOCRACIES TODAY are experiencing serious, often polarizing controversies over heightened numbers of immigrants and emigrants as well as refugees and asylum seekers. There is intense debate over whether human economic, political, cultural and security needs are really best served by strictly enforcing civic borders, and over whose needs are served, whose are harmed. Some read history as indicating that constitutional democracies benefit from free movement of persons, some see very different lessons. Both empirically and normatively, some argue today that traditional nation-state boundaries for civic membership are becoming obsolete; some find these views utopian or unpatriotic. Scholars from many disciplines and countries will explore these issues in the DCC Workshops and Spring Conference for 2007-2008.