GRAD WORKSHOP - Political Horizons and the Fruits of Frustration 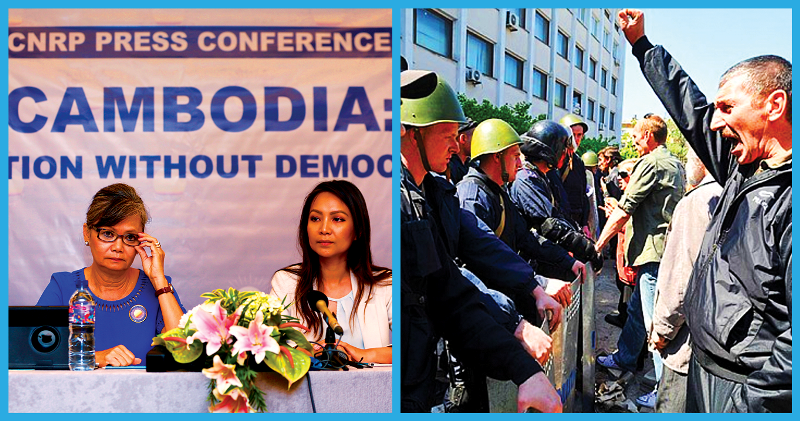 KATHERINE CULVER RAISES THE QUESTION OF WHEN, AND HOW, RULE-OF-LAW IDEOLOGIES associated with democratic governance and citizenship by donor countries might in fact support the legitimacy of authoritarian, or at least "illberally democratic" regimes, through a consideration of recent political events in Cambodia. In the decades following the devastation of the Khmer Rouge period, Cambodia was the recipient of considerable development aid aimed at building rule of law. Although Cambodians have enjoyed considerable social and economic development during this time, this development feels precarious to many observers because rule of law and a democratic political system have not yet materialized. In fact, several events since the 2013 elections, perhaps the high water mark of democracy in Cambodia, seem indicative of a decisive reversal of democratic political development. Perhaps most notably, a little over two years ago, on November 16, 2017, the Cambodian Supreme Court issued a pivotal decision which disbanded the main political opposition party. While this event was the subject of dire pronouncements on the part of international observers and a smattering of local journalists (who declared it the “death of democracy” in Cambodia), it was met with little internal resistance; and in subsequent national elections, the ruling party significantly increased its share of the vote. Given the widespread acceptance of rule-of-law ideas in Cambodia, this outcome suggests that the Supreme Court’s decision may be thinkable as consistent with rule of law for at least some Cambodians. Using recent examples of rule-of-law talk among Cambodian politicians, the paper examines how the transnational rule-of-law talk that has taken root in Cambodia may facilitate these apparently paradoxical political outcomes.

WHAT PROMPTS CITIZENS TO UNDERTAKE COSTLY CIVIC ACTIONS IN UNCONSOLIDATED DEMOCRACIES — their sense of individual agency or their sense of community? Despite the critical role civic engagement plays in democratic consolidation, few experimental studies have examined the underlying psychological motivations behind individual civic actions. Using an original experiment in Southeast Ukraine (N=1,381), IRINA SOBOLEVA demonstrates that individual empowerment constitutes a sufficient condition for civic engagement. Moreover, contrary to most theoretical expectations, both individual and collective empowerment cause a direct behavioral change in civic involvement irrespective of the change in attitudes and intentions. These results explain why recent experimental interventions failed to produce an attitudinal change in communities exposed to pro-democratic information. This paper contributes to our understanding of the underpinnings of civic culture by demonstrating that individual and collective empowerment form two distinct pillars of civic action. It also advances the theory of democratic learning by showing that democracies consolidate by providing opportunities for people to engage in various civic activities rather than inculcating democratic values through civic education and top-down democracy promotion.